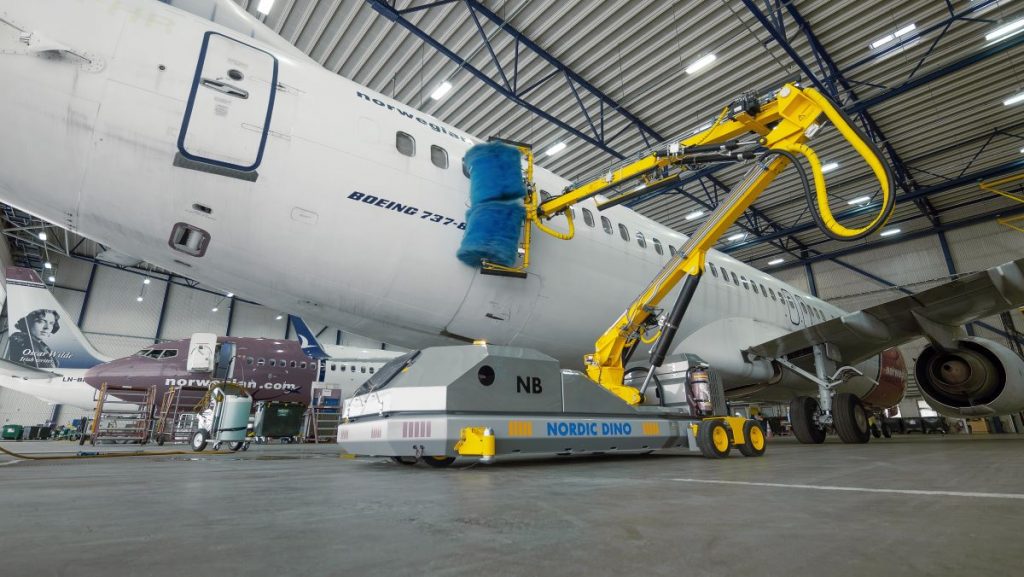 With the extreme temperatures becoming a usual summer occurrence for Europe – some regions reaching as high as 45°C – the now long-lasting and more frequent sweltering temperatures are a rather new problem for European airlines, as well as maintenance, repair, and overhaul (MRO) service providers are facing. As severe damage is being done to aircraft fuselages, how should European-based aviation solve the issue?

While temperatures that are two times higher than the ones currently in Europe are old news for such regions like the Middle East, this has become a fresh issue for the old continent. The extreme heat has become the main culprit in damaging the surface paint of aircraft fuselages, resulting in potential safety risks and grounded aircraft. Jan Brunstedt, CEO of Aviator Robotics AB and the creator of Nordic Dino, the leading aircraft exterior cleaning robot, says that to prevent such intense consequences, more frequent aircraft exterior upkeep should be a top priority.

“No one wants to have their aircraft damaged so severely it needs to be grounded and its fuselage completely repainted. That is, unfortunately, the end result of extreme heat affecting aircraft. As heartbreaking as it is, it does seem that these types of heat waves might very well be a reoccurring thing for Europe, and carriers, MRO providers, and manufacturers have to learn how to prevent that. One of the ways, and the first line of defense, in a way, is a more regular aircraft exterior washing.”

Brunstedt notes that the traditional way of cleaning the exterior of an aircraft – which means involving a sizeable crew of washers, equipment, and more – could only add to the problem. Manually washing an aircraft, more often than not, means a bigger chance for human errors and additional damage to the paints like accidentally scraping the fuselage with a scissor lift, for example. An alternative – semi-automatic washing solutions that only require one person to manage and operate the washing robot. The option is more cost-effective and saves time and personnel needed to wash one aircraft.

With the heat waves covering Europe, there have been resurging discussions around the role of exterior paints in the airworthiness aspect of the aircraft. While some manufacturers attribute chipping and cracking paints to the cosmetics and don’t necessarily see it as a risk, a number of carriers, on the other hand, treat it as that.

“It’s truly an interesting discussion and a very relevant one at that,” Brunstedt reflects on the topic. “While it’s a rather tough call how much does cracked paint affect airworthiness and whether it should only be seen as a part of aesthetics, one thing is for certain – unkept and untreated, the lifted parts of paint absorb dirt, humidity, which, in turn, can cause problems as serious as corrosion. It is very much of a snowball effect when it comes to properly take care of the exterior of the aircraft. One small oversight can lead to another bigger one until it becomes a very serious problem.”

As the high summer temperatures don’t seem to be subsiding anytime soon and coming back around next year as well, airlines and MRO service providers in Europe have to start making decisions and implementing solutions in order to prevent any serious problems that can arise from the lifted exterior paints.