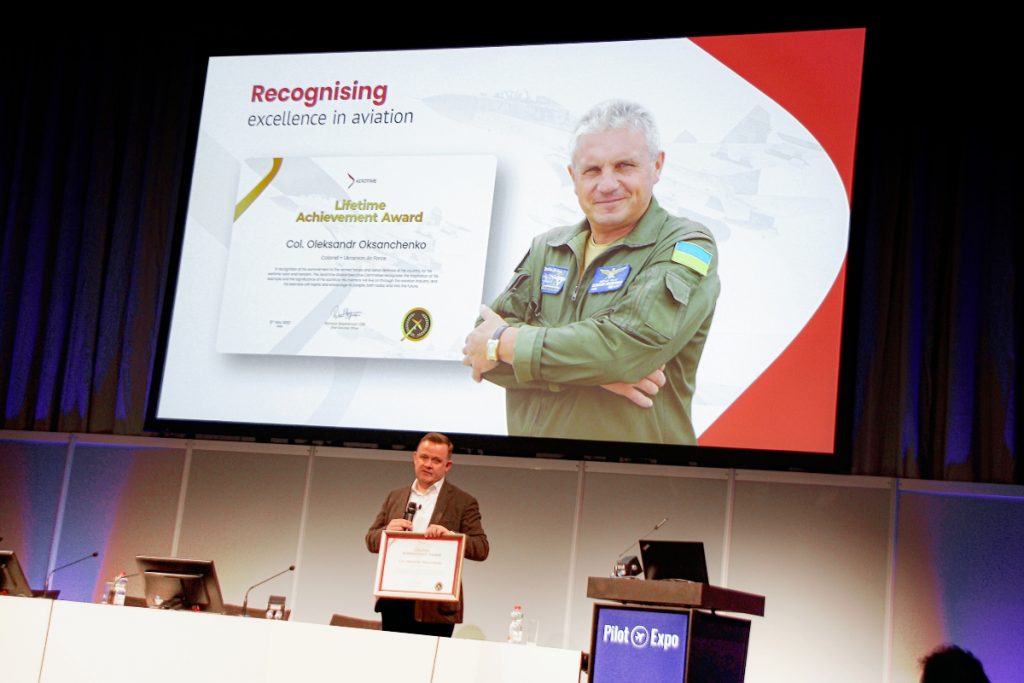 Ukrainian fighter pilot, Col. Oleksandr Oksanchenko, has received the inaugural AeroTime Lifetime Achievement Award after returning to active service from retirement, and being killed in action during the Russian invasion

Col. Oleksandr Oksanchenko (Полковнику Олександр Оксанченко), known as “Grey Wolf”, has posthumously received the first AeroTime Lifetime Achievement Award. The award was presented at the Ukrainian Embassy in Berlin to Andrii Dotsenko, the Air Attaché to the Embassy, on behalf of Col. Oksanchenko’s family, by Richard Stephenson OBE, Chief Executive and Editor in Chief of AeroTime. The award was first announced by Stephenson during his opening speech at the Pilot Expo Conference in Berlin, Germany.

Shortly before his death, Col. Oksanchenko had returned from retirement to active service in the Ukrainian Air Force to assist the aerial defense of his country against the Russian invasion. He was killed in action during an air battle in February 2022, soon after the invasion began.

Col. Oksanchenko joined the military in 1989 and dedicated his career to Ukrainian air defense. He earned the nickname “Grey Wolf” and, later in his career, became known internationally for his airshow displays. In 2017, he received the ‘As The Crow Flies’ trophy for the best overall flying demonstration during the Royal International Air Tattoo 2017. In 2018, he retired from the Air Force, but returned earlier this year on news of the Russian invasion.

“This inaugural AeroTime Lifetime Achievement Award seeks to posthumously recognize Col. Oksanchenko’s commitment to the armed forces and aerial defense of his country. In coming out of retirement to return to active duty, he demonstrated true valor and heroism. A symbol of the entire Ukrainian Air Force’s contribution and a true aviator, the inspiration of his example and significance of his sacrifice will live on through the aviation industry.

“The AeroTime Awards highlight the important contributions of aviation leaders to the aerospace industry. And Col. Oksanchenko is thoroughly deserving of this, the highest tier of award.”