Helping to read and understand: SKYCOP lends a hand to airlines with special book 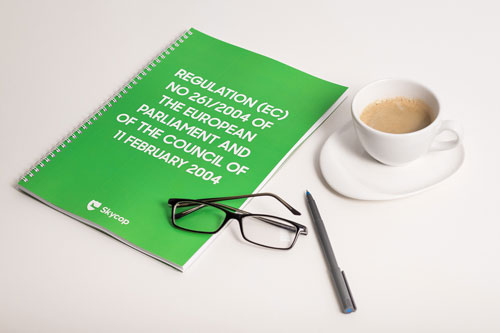 In the world of ever-improving technologies, where digital tools are changing the way we communicate, live and work, there are still those lacking even to the basic foreground of knowledge – literacy. On the occasion of International Literacy Day, SKYCOP, a company, standing up for airline passengers and their rights, has prepared and distributed a special edition of the EU 261 regulation with specially designed text to airlines, in order to help those that choose to be illiterate of passengers’ problems around the globe.

“Reading is understanding, and yet there are still high-profile, senior-level and successful businesses that willingly choose to be illiterate and merciless to hundreds and thousands of passengers every single day. Even with carefully outlined EU 261 regulation, airlines in the European Union owe more than €3 billion to passengers each year, clearly indicating that they have some issues with the basics of reading. With passenger numbers expected to rise to over 7 billion in the following 5 years, the carrier’s debt to unlucky travelers can grow to up to a mind-boggling €9 billion,” explains the idea behind the action Marius Stonkus, CEO of SKYCOP.

In fact, keeping in mind that compensation for delayed, cancelled or overbooked flight reaching up to 600 euro can be claimed even 6 years after the flight, the aforementioned €9 billion could already be the amount owed to the European passengers.

Over 10 airlines across the EU have received printed books containing oversized texts of the EU 261 regulation, which defines the process of compensations, as well as carrier’s obligations in case of flight delay, cancellation or overbooking. The reason behind such initiative – over 8 million passengers worldwide that have been stripped off of their rightful compensations by airlines denying the disruption cause.

“Every time the flight gets delayed or cancelled it’s the same story – airlines telling they don’t know and are not entitled to anything. Aviation is a pretty tight community, thus we want everyone in our circle to be on the same page. Since literacy is one of the key goals of UN’s long-term development plans, we would like to make it one of the essential goals in development of passenger-airline relationship. Who knows, maybe our books will find their way to every airline counter across Europe and will be a guidebook to sometimes clueless carrier employees that deny passengers of their rightful compensation of up to €600,” concludes Marius Stonkus, CEO of SKYCOP.