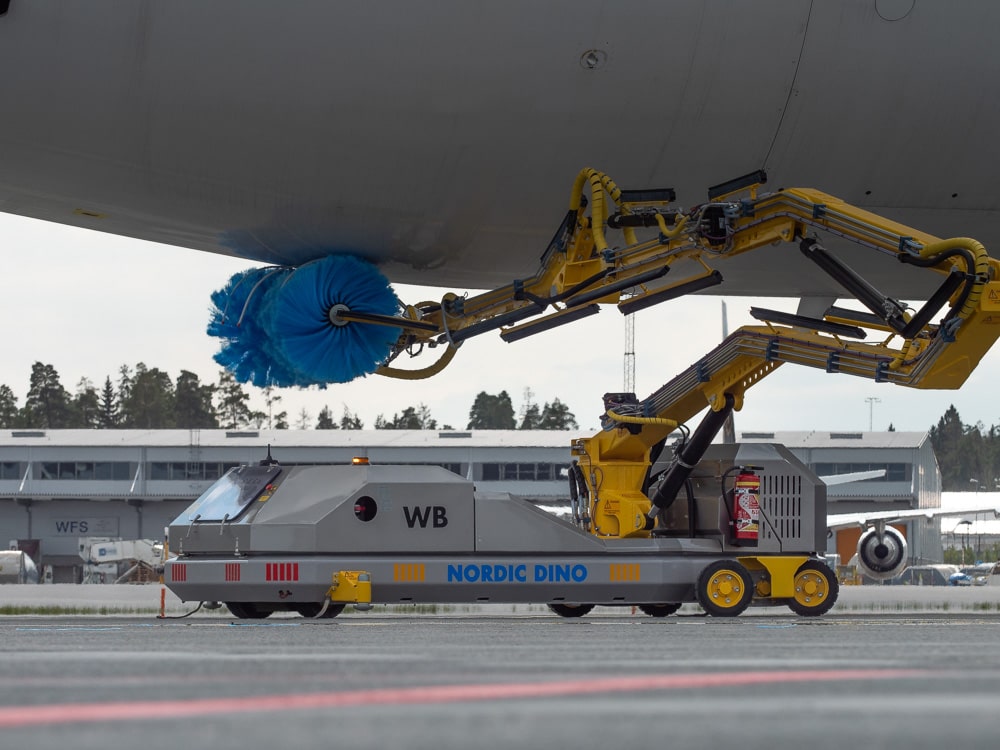 At present most of the equipment used on-ramp is powered by diesel or other fossil fuel burning engines. Starting with tow trucks and finishing with refrigerated lorries, the environmental impact of tens of fuel-guzzling machines working 24/7 at the airport is immense and needs to be addressed urgently. As new regulations are imposed to eliminate fossil fuels from operations, the question is: what’s next after diesel?

As of now, there are two eco-friendly solutions: Electric- or Hydrogen-powered vehicles. The latter, while sounding promising, is considered inefficient and lacks expensive refuelling infrastructure. For the moment, let us focus on the electric propulsion option.

With new energy-dense and cheaper battery designs entering the market, the cost of electric ground support equipment is not far from their diesel counterparts when accounted for resale value, exploitation, insurance, and servicing costs.

Furthermore, since equipment powered by electricity does not emit any direct emissions, such machinery can operate in enclosed spaces for extended periods without the danger of operating personnel being impacted by dangerous levels of Carbon Monoxide emitted from the engine. In turn, this means that the equipment previously excluded from hangars now, in their electric form, can return and operate indoors, increasing their flexibility.

Lastly, in the years to come, operating a diesel engine will become more expensive each year due to new environment-preservation regulations imposed by governments. As new emissions taxes are put in place, going electric will be the only logical option for long-term viability.

Not only environmentally friendly but also more versatile

One of the better examples of electric proving itself as a winner in aviation ground support equipment is Nordic Dino, a semi-automatic aircraft exterior cleaning robot. At first, the robot was offered as a diesel-only solution, however, since then, Aviator Robotics AB has unveiled Nordic Dino Zero Emission, an electric version of the well-known product.

According to Jan Brunstedt, the CEO of Aviator Robotics AB, the electric version is a step towards a more sustainable aviation industry and a welcome addition to the robot’s versatility. Previously it was complicated to perform a wash inside a hangar with diesel-powered Nordic Dino due to the harmful gases being emitted from the engine. With the Zero Emissions version, says Jan Brunstedt, washes can be performed both inside and outside without any problems.

“The main concern we had when planning Nordic Dino Zero Emission was whether the robot would still be able to wash at least 3 aircraft per night. After the rigorous testing phase, we discovered that the equipped battery pack would allow the robot to perform 2 Boeing 737 or Airbus A320 exterior cleanings without the need to recharge. After the two exterior cleanings, it takes only 40 minutes to recharge the battery to 65% and begin the next aircraft exterior cleaning process. As a result, the transition to electricity has had no negative impact on the performance of our product.

The main complaint from our clients with the diesel version was the lack of ability to wash aircraft indoors, a problem which the electric version unintentionally helped us address. Due to the electric product’s zero-emissions nature, the robot was certified for operations both outdoors and in a hangar, which, in the past, was a big hurdle for our clients with the diesel version.

At Aviator Robotics, we believe that the future of GSE will be electric because its versatility, quietness, simplicity to maintain, and the sustainability from battery-powered vehicles that cannot be matched by any diesel counterpart.” – says Jan Brunstedt.