Middle East has been a real success story in the aviation industry, and its business aviation segment is not an exception. By 2020 the regional business jet fleet size is projected to grow from present 500 to 1 375, according to MEBAA, while the business aviation sector will be worth around $1.3 billion. The sector has proved its potential as traffic and flying hours across the region are up over 12% from last year. But even as the region continues to successfully recover from the economic crisis, there are still storm clouds on the horizon.

With its GDP expected to grow at an average of 3.8% over the next 20 years, the Middle East remains a promising market for business aviation. The rising importance of the segment in the region is characterised by the number of subsidiaries being launched by the region’s major airlines. For instance, Emirates has introduced its Emirates Executive service, while Qatar Airways has its Qatar Executive and Saudi Airlines has Saudia Private Aviation. The demand is also starting to attract companies offering some innovative business models, such as X-Jet, which plans to launch a service, covering all aspects of support for individually owned private jets for a fixed annual fee.

“The rise of demand for private travel and related services in the Middle East is what we’ve been witnessing for some time now. While some 25 years ago business aviation in this region was mainly a tool for royal families and presidents, in the last 5 to 10 years the market has seen a major shift to corporate use. People started too see the benefits of private air travel as a tool to conduct business, save time and be more flexible. As a result, most of the aviation market experts are convinced that the greatest business opportunity lies in the corporate, not in the VIP market,” shares Vitalij Kapitonov, the CEO of KlasJet.

According to MEBAA, currently up to 70% of flights performed on private jets within the Middle East are for business purposes, while luxury travel accounts for the remaining 30%. Nevertheless, high net-worth individuals are still the key drivers of the business aviation growth in the region, and here comfort remains a must, as the costumers are among most demanding clients in the world when it comes to customization and other additional services. Thus, capturing the small but significant patronage of the region's super rich is becoming increasingly competitive as more private jet charter companies tap into a market that is expected to grow by around 12% in the next two years. However, despite the positive signs, several obstacles are limiting the potential expansion of business aviation operations in the Middle East.

“The market in the Middle East has been significantly damaged by a combination of political shocks and the global economic crisis, thus undermining demand from business 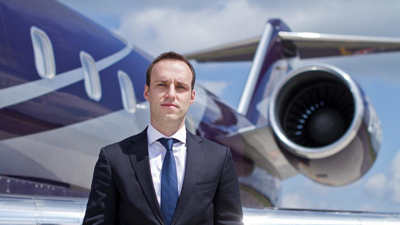 users and wealthy individuals. As a result, business aviation is still almost non-existent in such countries as Yemen, Syria and Libya. The lack of the skilled labour including pilots, flight planners, engineers and air traffic controllers should be taken into account as well,” shares the CEO of KlasJet.

According to the executive, other problems to mention are airport congestion and the use of air space, which is becoming increasingly crowded as the big airlines launch more routes. The situation is further exacerbated by the fact that a large part of airspace is reserved for military use. Removal of these barriers would help to further accelerate the growth of the market in the Middle East. “Of course, such problems are symptoms of success more than anything else. However, if the industry is determined to maintain its current trajectory and reach its full potential in the future, then it will have to find solutions to such issues sooner or later. For now, however, the main focus of the regional authorities has to remain on quality and safety of operations. With this in regard, opening the market for more certified competition would definitely help in keeping the bar high enough,” concludes Vitalij Kapitonov, the CEO of KlasJet.