FL Technics, a global provider of tailor-made aircraft maintenance, repair and overhaul services, has successfully completed a cooperation project launched together with the United States Armed Forces. Under the project, FL Technics provided support services as well as secured appropriate conditions for the maintenance of heavy-lift helicopters CH-47 Chinook conducted by the U.S. Army 160th SOAR (A).

The U.S. Armed Forces chose Lithuania as its base for carrying out maintenance works on its military MH-47Gs (one of the latest versions of CH-47 Chinook) while preparing for the annual Exchange Training JCET 2016 in Europe. Operated and serviced by specialists from the 160th SOAR (A), MH-47Gs reached Kaunas International Airport in the beginning of April.

“Being an approved NATO supplier as well as following an in-depth check by the U.S. Army, we were chosen to provide 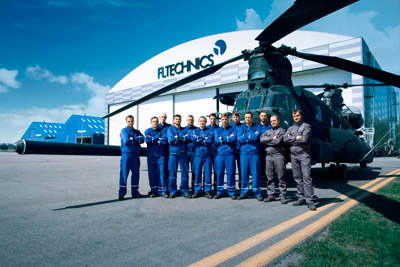 support with regard to securing the best conditions for the work of aviation specialists from the U.S. Military. We assisted them during unloading the rotorcraft from Boeing C-17s and receiving all the necessary aviation safety permits. We also ensured that both the staff and helicopters would have a separate restricted area which meets the U.S. Army’s high security requirements,” commented the CEO of FL Technics Zilvinas Lapinskas. “We are delighted that Lithuania is becoming a regional hub for the maintenance of not only civil, but military aircraft as well. Complying with the safety and reliability standards of NATO and the U.S., we hope to be able to support the Alliance and its training programs in future.”

The 160th Special Ops Aviation Regiment (Airborne), also known as the Night Stalkers, is a special operations force of the United States Army that provides helicopter aviation support for general purpose forces and special operations forces. With a fleet of over 180 rotorcraft, including MH-47G Chinooks, A/MH-6M Little Birds and MH-60M Black Hawks, the 160th SOAR (A) is engaged in attack, assault, and reconnaissance missions.