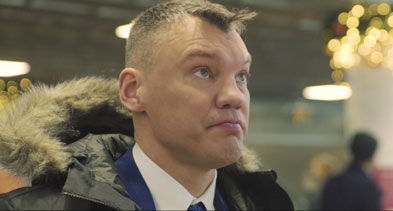 Head coach of BC Zalgiris Kaunas Sarunas Jasikevicius had an amazing run – 5 victories in a row in Euroleague and climbing to 4th place in the leaderboard. Leading a team with one of the smallest budgets in the league, Europe’s basketball legend has wowed the competition and as Jasikevicius explains, one of the reasons behind such season is quite the unexpected one.

The only basketball player to lead three different teams to Euroleague‘s titles, Jasikevicius has been admired for his game-reading abilities, spectacular passes and courage throughout his years as a player. Transitioning these skills towards his career as a coach, Jasikevicius has put a lot of emphasis on his team’s environment.

One of the key advantages the team has given the coach and the main reason behind him staying in Kaunas despite bigger sharks offering million-dollar contracts is convenient travelling. Due to its partnership with flight claim company SKYCOP, Zalgiris currently uses a business jet to charter to its away games, meaning, no lines at the airport, no delays and no energy wasted on selfies with fans, however, the upsides are even more decisive.

“With 30 games in regular season alone, 15 flights in less than 7 months is a tough one for any traveller, let alone professional basketball players. It is no surprise that the coach was extremely happy with a new way of away game travels and we see the benefit of that in the overall standings”, – shares Marius Stonkus, the CEO of flight compensation company SKYCOP. “It is why we decided to also choose Sarunas Jasikevicius to be the face of our brand – he perfectly resembles what we are all about. Going the extra mile for people, giving it all on the court and maintaining positive attitude despite courageous fight. We are more than sure that Saras will help us spread awareness about the deepening issue of flight cancellations and delays.”

BC Zalgiris Kaunas has already won 12 games in the 2017-2018 Euroleague season. This is the best performance by the Lithuanian team since the victorious 1999 season, when Zalgiris dominated the European basketball.

“The way we travel to away games this season is definitely one of the main advantages – no lines or long waits at the airport means no stress and a lot of saved energy for the players. For the coaches it provides a great chance to better concentrate on the work at hand and devote even more time to opponent analysis. Every detail in basketball is important when your only goal is victory and I personally think that quality travelling is one of them,” shares S. Jasikevicius.

Currently, European carriers owe a whopping €3.2 billion in unpaid flight compensations for flight cancellations, delays and overbookings. European law entitles every passenger that has experienced delay of more than 3 hours, cancellation 14 days or less prior to departure and overbooking compensation from €200 to €600 depending on flight distance.