Military aviation MRO management calls for a change of mindset 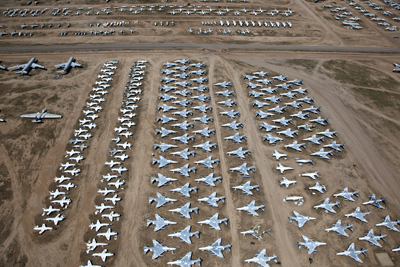 According to a 30-year aircraft procurement plan the U.S. Defence Department submitted to Congress three years ago, it would be at least 10 years before new strategic airlifters and long-range bombers are produced and delivered. In the meantime, during the Aero India 2015 the CEO of RAC MiG stated the corporation is considering prolonging the service age of its MiG-29 aircraft by almost 2 times – to 40 years. However, while sustainment of aging aircraft is clearly becoming more and more important for the Air Forces worldwide, the operators will need to revamp their practices to make them more efficient and less costly.

In the financially challenging post-crisis times most countries prefer to update or repair their military aircraft fleet instead of spending money on new equipment. ASDReports indicates that as a result of multiple budget cuts the total amount of money spent on military MRO currently exceeds the amount spent on new aircraft production. In fact, according to Bloomberg Government, the U.S. Defense Department alone awarded $6.2 billion worth of contracts for aircraft maintenance in 2013: $3.7 billion for the Air Force, $1.4 billion for the Army, $1.1 billion for Navy and $31 million for other defence agencies. Needless to say, considering such costs, becoming as efficient as possible in managing the relevant maintenance processes is becoming a number one priority.

“As most military aircraft operators were forced to cut-down on purchases of new aircraft, their spending on maintenance services has naturally increased. As a result, the

sustainment of aging aircraft is likely to become a more expensive activity in the next few decades. In fact, the global military aviation MRO market is expected to experience a CAGR growth of around 3.4% in the next decade,” shares Arturas Dziugelis, Head of FL Technics Military Aviation Department. “At the same time, despite the rising demand for more efficient solutions, certain laws in some countries still do not favour contracts with foreign independent MROs, creating serious obstacles for possible improvements.”

It is reported that in some countries imported components or equipment can incur a customs charge at the rate of up to 100%, not mentioning the taxes on other MRO activities, which significantly reduce the competitiveness of providers. Moreover, sometimes even the participation in the tenders can be difficult, as most of the relevant decisions may require the approval of the highest political authorities, including the president. And then there are also the increasing challenges with location and delivery of parts and components for aging aircraft to consider. With regard to such a situation, Arturas Dziugelis, Head of FL Technics Military Aviation Department states it’s important to finally realize the benefits that liberalization of military aviation MRO market can bring to the table.

“In many cases airlines use the exact same equipment that the military employs. For instance, as more and more Boeing 737 derivatives are being used in the military, thousands of components in many combat systems are currently commercial. Moreover, the Air Force uses about 2 000 CFM56 engines widely used around the world, yet still maintains a separate supply chain. In the meantime, while there certainly are mission differences, they don’t drive differences in how fleets are sustained. So if the military operators could leverage the global supply chain marketplace that already exists in the commercial aviation, it would be possible to attract more competition to the military segment, and lower the costs as a result,” says the Head of FL Technics Military Aviation Department.

Surely, outsourcing military MRO has its risks. Nevertheless, such outsourcing-enabled approaches as performance based logistics contracts are becoming more popular in the military aircraft field, while further budget pressures suggest they are here to stay. “As the industry faces the need for new solutions, the accompanying challenges need to be addressed quickly and without unproductive prejudice. In today‘s economy, when everyone is looking for ways to maximize efficiency and cut down costs, removing unnecessary regulatory obstacles is the only way to move forward,” says Arturas Dziugelis, Head of FL Technics Military Aviation Department.